A fast-growing tumbleweed called “hairy panic” is clogging up homes in a small Australian town.

Extremely dry conditions mean the weeds pile up each day outside a row of homes at Wangaratta, in Victoria’s northeast.

Frustrated residents are forced to clear out the weeds for several hours every day, with piles of hairy panic at times reaching roof height.

A nearby farmer is being blamed for failing to tend to his paddock.

Hairy panic, also known by its Latin name Panicum effusum, is a grass that is found in every Australian state.

It grows rapidly and can cause a potentially fatal condition called “yellow big head” in sheep if eaten in large quantities. 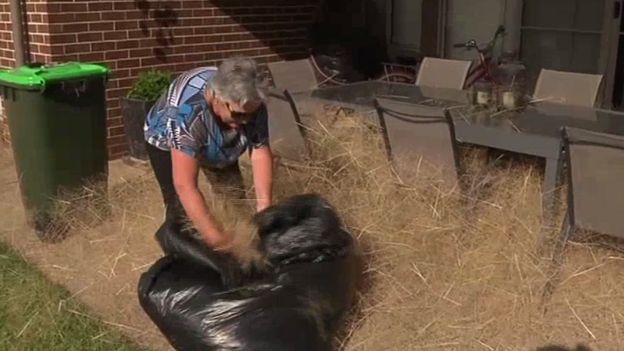 Frustrated residents say they are tired of clearing out the weeds

Wangatta veterinary surgeon Richard Evans told the BBC the weed would lose its toxicity once it dried up.

“The important thing is it’s not going to kill people’s dogs and cats, it just makes a hell of a mess,” he said.

Authorities are unable to help with the clean-up because the tumbleweeds do not pose a fire threat, reports say.